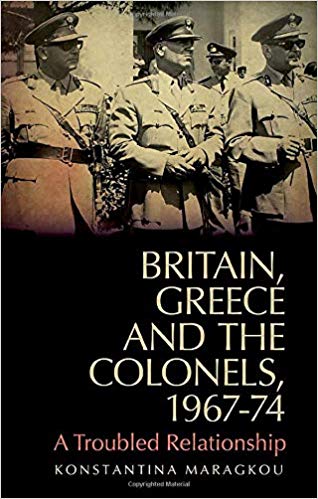 Britain, Greece and the Colonels, 1967-74: A Troubled Relationship

The long history of Anglo-Greek relations has deservedly attracted much attention. One of its most controversial – yet least explored – phases was that spanning the Greek Colonels’ seven-year military junta, from 1967-74. Drawing on a corpus of diverse, original and largely primary material, Maragkou provides a comprehensive analysis of British policy towards Greece during this tumultuous era. Not only does she contribute to the historiography of Anglo- Greek relations, but her book also serves as a case study of British foreign policy within the Cold War. And by demonstrating that national history can be best understood by analysing the relationship between a nation state and factors beyond its control, the conclusions drawn can be applied beyond the strictly regional or the exclusively bi- lateral, as they also fit into a transnational para- digm. It was in the 1960s when what we now term ‘globalisation’ was in full swing. Henceforward, no nation – and no foreign office – was an is- land: it was part of a whole, in which both state and non-state actors internationally played their part in the evolution of thinking on foreign affairs. Here is the key to understanding the tortuous history of Britain and the Greek Colonels – one that has many echoes in our own time.