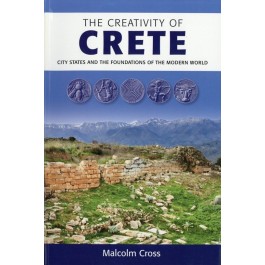 Creativity of Crete: City States and the Foundations of the Modern World

Crete is famous for its Minoan civilization, which by 1200BC had come to an end. It is far less well known that less than 600 years later, Crete pioneered the idea of the ‘city-state’ and developed it for longer than anywhere else in the ancient Greek world. Thought by Homer to have numbered up to one hundred, even the whereabouts of many of the cities at the heart of these tiny states is now unknown. This original book describes 65 sites from the Classical (500-330 BC) and Hellenistic (330-67 BC) periods and argues that the achievements of the city-states should be more adequately recognized. If codes of law existed elsewhere at an earlier date, none developed the rule of law before Cretan city-states. While ancient Athens famously developed a form of democracy, Cretan city-states created constitutions and elected assemblies that gave rise to another variant of democracy. Although the Greeks did not invent coinage, it was adopted with great enthusiasm in Crete and by the late fourth century BC the island possessed more than forty mints producing interchangeable coins. Aristotle recognized that Crete was ideally sited to exploit trading opportunities, and this book provocatively argues that the rule of law, representative democracy and a monetary system enabled it to do so. The wealth this trading generated attracted the interest of Rome whose invasions between 69 and 67 BC brought an end to the island s independence. Written for the general reader with an interest in Mediterranean civilizations, archaeology, classics or ancient history, the text includes a unique gazetteer summarizing the literature on 65 archaeological sites, together with appropriate maps and coordinates.