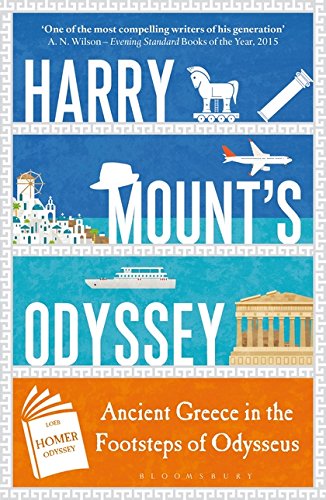 Harry Mount’s Odyssey: Ancient Greece in the Footsteps of Odysseus

Architecture, art, sculpture, economics, mathematics, science, metaphysics, comedy, tragedy, drama and epic poetry were all devised and perfected by the Greeks. Of the four classical orders of architecture, three were invented by the Greeks and the fourth, the only one the Romans could come up with, was a combination of two of the former.The powerful ghost of ancient Greece still lingers on in the popular mind as the first great civilization and one of the most influential in the creation of modern thought. It is the starting block of Western European civilization. In his new Odyssey, eminent writer Harry Mount tells the story of ancient Greece while on the trail of its greatest son, Odysseus. In the charming, anecdotal style of his bestselling Amo, Amas, Amat and All That, Harry visits Troy, still looming over the plain where Achilles dragged Hector’s body through the dust, and attempts to swim the Hellespont, in emulation of Lord Byron and the doomed Greek lover, Leander. Whether in Odysseus’s kingdom on Ithaca, Homer’s birthplace of Chios or the Minotaur’s lair on Crete, Mount brings the Odyssey – and ancient Greece – back to life.