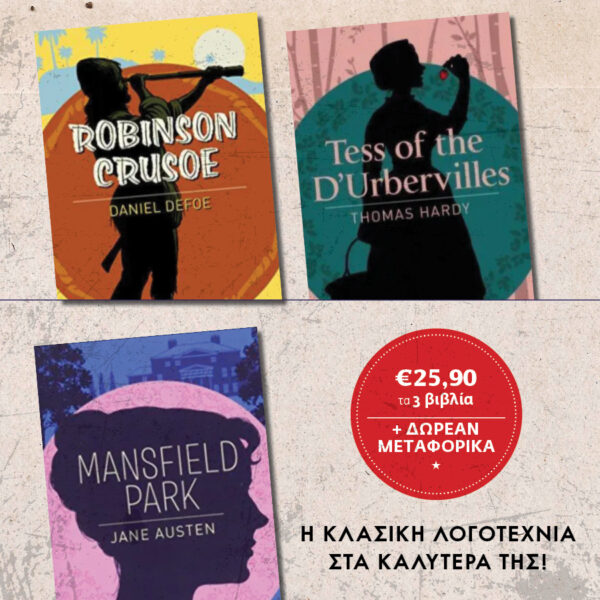 Robinson Crusoe was first published in 1719 and credited Crusoe as the author, so readers believed that he was a real person. Shipwrecked, Crusoe spends 30 years on a remote tropical island before being rescued. It is thought to be one of the first novels in the realistic style and was well received from its first publication.

Thomas Hardy’s beautiful and spirited heroine is driven to her tragic end by three men who betray her trust: John Durbeyfield, her drunken, feckless father; the seducer Alec d’Urberville, who leaves Tess pregnant at 16 with a son that dies in infancy; and Angel Clare, the unforgiving husband who rejects her. Abandoned in so many ways, Tess suffers all the hypocrisy and injustice of Victorian morality that Hardy himself despised. When Angel returns from abroad, humbled and hoping for reconciliation, Tess makes a fateful bid to be reunited with the one person she has never ceased to love.

When shy Fanny Price arrives at Mansfield Park to live with her cousins, she is overwhelmed and only put at ease by her cousin, Edmund Bertram, whom she soon comes to love. But Edmund’s head is turned by the beautiful Mary Crawford and she and her brother Henry spark a series of romantic entanglements that lead the Bertram family to the brink of social disaster. It becomes apparent to Fanny that pretty manners and fine words are no substitute for integrity.