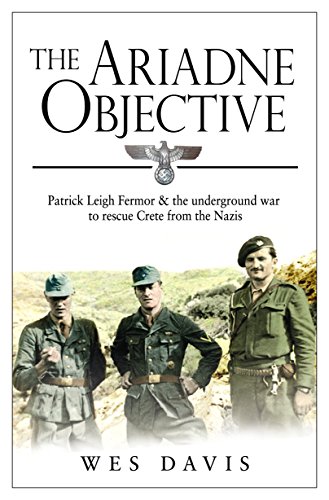 The Ariadne Objective: Patrick Leigh Fermor and the Underground War to Rescue Crete from the Nazis

In the bleakest years of the Second World War when it appeared that nothing could slow the advance of the German army, Hitler set his sights on the Mediterranean island of Crete, the ideal staging ground for domination of the Middle East. But German command had not counted on the strength of the Cretan resistance or the eccentric band of British intelligence officers who would stand in their way, conducting audacious sabotage operations in the very shadow of the Nazi occupation force.

The Ariadne Objective tells the remarkable story of the secret war on Crete from the perspective of these amateur soldiers who found themselves serving because, as one of them put it, they had made ‘the obsolete choice of Greek at school’. John Pendlebury, a swashbuckling archaeologist with a glass eye and a swordstick and Patrick Leigh Fermor, the future travel-writing luminary who, as a teenager in the early 1930s, walked across Europe, a continent already beginning to feel the effects of Hitler’s rise to power.

Having infiltrated occupied Crete, these British gentleman spies teamed with Cretan partisans to carry out a cunning plan to disrupt Nazi manoeuvres, culminating in a daring, high-risk plot to abduct the island’s German commander. In this thrilling and little known episode of Second World War history, Wes Davis paints a brilliant portrait of some extraordinary characters and tells a story of triumph against all the odds.