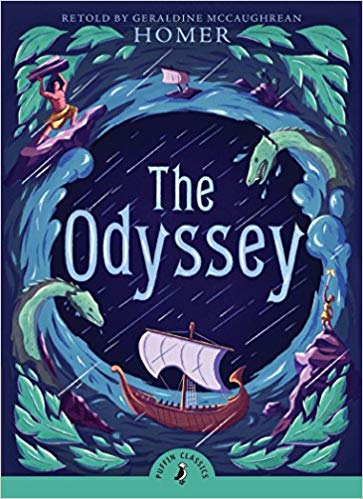 The epic journey of Odysseus, the hero of Ancient Greece…

After ten years of war, Odysseus turns his back on Troy and sets sail for home. But his voyage takes another ten years and he must face many dangers – Polyphemus the greedy one-eyed giant, Scylla the six-headed sea monster and even the wrath of the gods themselves – before he is reunited with his wife and son.
Retold by award-winning author, Geraldine McCaughrean.
Geraldine McCaughrean has written over 160 other books, including A Little Lower Than Angels, which won the Whitbread Book of the Year Children’s Novel Award in 1987, A Pack of Lies, which won the Guardian Prize and Carnegie Medal in 1989 and Gold Dust, which won the Beefeater Children’s Novel Award in 1994. She has written retellings of notoriously tricky classics including El Cid, the Epic of Gilgamesh, Moby Dick and The Pilgrim’s Progress.
In 2004, she won a competition to write the sequel to J M Barrie’s Peter Pan. And in 2006, Peter Pan in Scarlet was published to great acclaim.