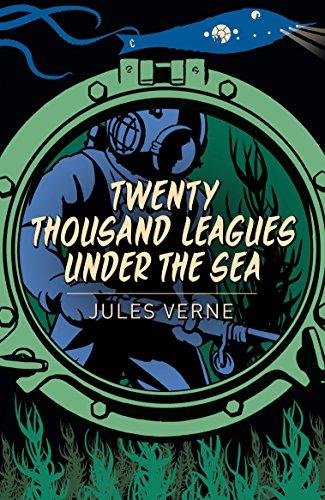 TWENTY THOUSAND LEAGUES UNDER THE SEA

“It was a squid of colossal dimensions . its arms stretched a distance twice the length of its body and were writhing like the serpentine head of the furies”. Twenty Thousand Leagues Under the Sea is an epic adventure story from the ‘Father of Science Fiction’, Jules Verne. On an expedition to hunt down a sea monster, Professor Arronax and his companions instead encounter the eccentric and ruthless Captain Nemo and his marvellous submarine. Held captive in the Nautilus and drawn into Captain Nemo’s mission of revenge, they travel across the ocean – from the submerged city of Atlantis, to the coral reefs of the Red Sea and the hazardous waters of the Antarctic. Twenty Thousand Leagues Under the Sea is one of the greatest tales of the imagination ever and provides an unmissable adventure for every reader.